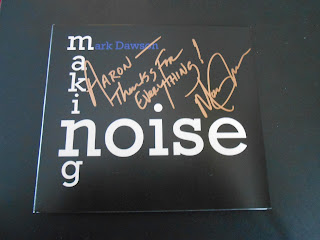 If you appreciate good music, you must get your hands on a copy of Mark Dawson's latest solo album, "Making Noise". It was just released in recent weeks.

Mark Dawson is lead singer of the legendary 1960s pop/rock band, The Grass Roots. "Making Noise" is his second solo album, and it is truly a lot of fun. I had the pleasure of interviewing Mark a few months back, and I also offered to write up a press release for him back in December to help him announce the album's release. It was also a great pleasure to interview Carl Giammarese, lead singer of 1960s greats, The Buckinghams, a little over a year ago. Mark and Carl teamed up on a great duet for the album entitled, "So Unusual". Also on the album, among other awesome original material by Mark, is his take on "Long As I Can See The Light" by Creedence Clearwater Revival. Being a big CCR fan, I always appreciate a good cover of any CCR song, and Mark did a great job at it (I interviewed CCR drummer Doug Clifford, too!)

When my copy of "Making Noise" arrived about a week ago, it came autographed by Mark. But what was really special for me was that he also included me in his "thank yous" on the CD case! I certainly didn't expect that. He didn't have to do that. I really appreciate it.

So check it out. If you like good music, you have to make "Making Noise" a part of your collection.