Woodstock performer and Rock and Roll Hall of Famer shares with Milwaukee-area journalist his thoughts on our city, influences, hobbies, advice to aspiring musicians, what it’s like to be a part of one of the greatest bands in rock history, a special upcoming anniversary, the age of iTunes, and a whole lot more.

From my opening remarks for my interview with CCR drummer Doug “Cosmo” Clifford in June 2012: Twice on The Ed Sullivan Show. Woodstock. Madison Square Garden. Royal Albert Hall. The Rock and Roll Hall of Fame. And plenty of other memorable venues, concerts, shows, and milestones along the trails that Creedence Clearwater Revival (1968-72) blazed, paths that are lined with a lot of gold and platinum. And though broken up for 40 years now, CCR’s music is engrained in our culture to this day, appearing in countless movie soundtracks, commercials, television shows, and on radio stations all around the country. Search for the band or individual members on Google or YouTube, and an endless amount of tribute sites, written interviews, biographies, recordings, and film footage of performances and interviews comes up.

“It’s going to be 20 years next year already. We’re going to have to do something special. Maybe we’ll tour on Chronicles,” Stu told me in our hour-long phone conversation July 23, followed by a brief pause. Of course, that’s meant to be a joke. “That’s what we’ve been touring on for nearly 20 years,” he added with a laugh, referring to the collection of both original hits and unique spins on timeless classics touching the realms of rock ‘n’ roll, blues, country, folk, and soul that catapulted Creedence Clearwater Revival onto the national scene. Well, it’s all in the marketing, we both agreed with a laugh. Perhaps a PR strategy like that will reach a few new fans that haven’t noticed what’s been going on for the past two decades.

Since 1995, Stu has been touring the world with fellow original Revival member Doug, best friends since junior high school, as Creedence Clearwater Revisited, in a great line-up that also features John Tristao on lead vocals and rhythm guitar, Kurt Griffey on lead guitar, and Steve Gunner rounding it out nicely on multiple instruments ranging from harmonica and percussion to acoustic guitar and keyboards. “But seriously, we’ll have to do something special.” 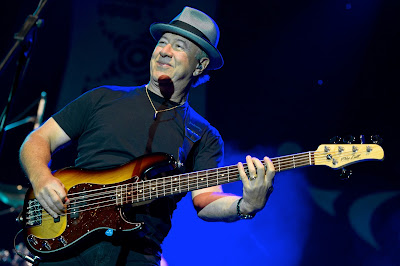 It all started when Doug had a simple idea. “We were living in the same small town up in the mountains. Small town, not much to do. Doug thought it’d be neat to get a keyboard player and guitar player together,” Stu recalls. Starting out as a party band for friends and private audiences in the very beginning, Revisited has gone on to earn fans and accolades throughout the world, performing some 60-70 shows per year all around North, Central, and South America; Australia; Hong Kong; all over Europe.

Revisited, minus original Revival front man John Fogerty and his older brother Tom, who passed away in 1990, has survived five times longer than Revival, and is not showing any signs of slowing down any time soon. As I wrote in my interview with Doug last summer, “And the fans never tire of the music. Revisited’s two-disc live Recollection went platinum, which can perhaps be interpreted as a referendum of sorts on the band in which the die-hard fans of the original CCR didn’t seem to care that it was minus original lead singer John Fogerty. They just wanted to hear the old hits again, and they came to love it.”

When not on stage, Stu, still rocking strong at 68 now, enjoys traveling, golfing, and scuba diving. He gave up flying some years back, which was another big passion of his. “I had a Cessna 185 that I sold some years back,” he told me. “A lot of fun. I’d take it all over. From show to show. On vacations.” He still keeps a few acoustic guitars around his home for enjoyment, too. Many may not realize, but Stu grew up playing guitar, piano, and trumpet, in addition to learning the bass. “I came from a musical family. My father played trumpet in a big band, and my mother played piano and organ - a Hammond B3.” He played piano in the pre-CCR band, The Blue Velvets.

During our conversation, Stu took a few moments to reflect back on Woodstock. I explained to him that all we have in my generation to go off of is the film footage, audio recordings, and all the commercialized graphic tees depicting Jimi Hendrix and a host of others. “Well, it was a great weekend. We were the headliners for Saturday night. The logistics of it all, getting in and out, was tough, I remember. But the audience is the real story of Woodstock. They made it happen. The music was just the music of the day.” He continued with a laugh, “And the audience was so dedicated. Here we were with steak, wine, and good reefer back stage, and the audience was muddy and had bad acid.”

Asked who he enjoyed listening to in the 60’s, Stu quickly declared, “Everybody!” “You name it. Booker T. & the M.G.’s, Hendrix, Spencer Davis Group, The Kinks, Otis Redding, early Moody Blues stuff.” Stu took a few moments to reflect back on the whole era. “It was the greatest revolution since the founding of the country,” he said, adding, “It was a time of learning, of awakening, of awareness. And there was so much going on, not just in music, but in art and cinema, too. It truly was a renaissance.”

Stu also took a few moments to talk about Tom Fogerty. Doug recalled in my conversation with him last summer that, “Without Tom, there would never be a CCR. He was a great guy. He paid for it all.” Stu agrees. “I agree with Coz’s [Cosmo’s] view on Tom. Tom groomed us. He was an early mentor of us. He took us in the recording studio. His own band just wasn’t interested in the full-time commitment it all takes,” he said. Sadly, Tom passed away in 1990 of AIDS after receiving a series of tainted blood transfusions for back troubles he was suffering from. “If Tom were around today, I wouldn’t doubt it if he’d be a member of Revisited,” he added.

Stu has good memories of Milwaukee. “How about West Allis?” he quickly chimed in with, when asked about performing or staying in Milwaukee, alluding to the metro area city that is home to the Wisconsin State Fair. “Great Place.” In addition to Wisconsin State Fair, Revisited has appeared a number of times at Summerfest, as well, held along Lake Michigan in Milwaukee. “I don’t know if Revival did Milwaukee,” he said, adding, “But I couldn’t tell you for sure.” He did recall performing at the Riverside Theater in downtown Milwaukee one night in the mid-late 80’s when he was a member of country band Southern Pacific. “Yeah, we opened for The Oak Ridge Boys. Beautiful theater. Really nice venue. Reminds me of the Fillmore.” 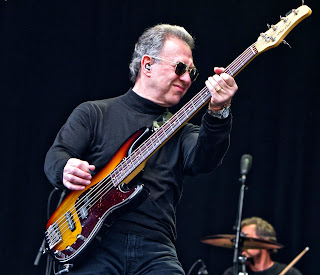 It was during his time in Southern Pacific (1986-91) that he saw a different kind of management philosophy. “There was no autocratic control freak in the band,” he told me, continuing, “We operated under the belief that everyone can make meaningful contributions. No one has all the answers. If you have great ideas, simply present them! It worked out well, and that’s how we run things in Revisited.”

His advice to aspiring musicians: “Get a trade or education to fall back on,” he said. “It’s a really brutal business. And the top of the pyramid is really small, with steep edges.” And it’s not just tough for musicians, Stu explained to me, but for everyone in the business. “Producers, engineers, everyone. It’s tough. So have a backup plan you can fall back on.” He explained that it took 9.5 years for the band to break out nationally with its 1968 version of “Susie Q” when you factor in the pre-CCR bands The Blue Velvets (1959-64) and The Golliwogs (1964-67). “And it’s just a matter of practice, practice, practice. Grow, grow, grow. Learn, learn, learn.”

I was curious to know if there was anyone he was keeping an eye on as far as up-and-coming talent. “Not really, still very much into my own era,” he said. “But I do enjoy a variety of music. I’m mostly into guitar rock, but Bruno Mars, Alicia Keys, and Beyonce made some good records.” Other artists and bands he enjoys include Aretha Franklin, Rhianna, and The Aristocrats, a jazz fusion band. “Lately, I’ve been really into Electric Light Orchestra,” Stu added. “They have this really great collection of their work that came out.” He talked up the Foo Fighters enthusiastically in our conversation, as well. But perhaps the most passion-fueled moment of our chat came when he brought up the band, Queens of the Stone Age, and its recent album …Like Clockwork. “It is so well-written, so well-done. I’ve listened to it 10-15 times now. iTunes won’t let me gift it anymore! Tells me I’ve exceeded my limit.”

For a guy who started playing and performing music in the 1950s and has seen and dealt with his fair share of non-portable stereo equipment and other listening devices through the years, Stu is very much the modern man. He is a big fan of iTunes and the whole download scene. “I’m always downloading stuff,” he told me. “Music goes with me everywhere. The big media system I have in my home is really only used now for piping holiday music throughout the house during the holidays.”

When asked if he had any final parting words for fans or just words of wisdom, Stu said, “The most humbling part of it all is how many people still follow CCR. I’ve lived a blessed life, and it’s all because of the fans. We’re grateful.” He continued, “Before accountability comes responsibility. Get informed, and get involved. Also, if you think you’re great, play Oakland,” referring to a statement he saw written on a dressing room wall in a theater somewhere years ago. “Oakland’s my hometown,” he added. 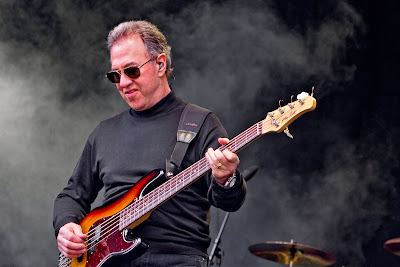 As I stated in my interview with Doug last summer, being a big CCR fan myself made this interview that much more fun and special for me, and I’m thankful for the opportunity. To Stu, Doug, and all the guys - John, Kurt, and Steve - thanks for carrying on a legacy of such great music, music that has been a main staple of so many college dorm parties and backyard barbeques; that has gotten us through long commutes on the road and provided us company during quiet times of reflection; that has provided us with entertainment on so many bar juke boxes; and, as Stu quickly chimed in with, “How about all those back seat escapades? I heard we were there for plenty of those, too.”

Visit Credence Clearwater Revisited on the Web at: www.creedence-revisited.com .