John Domanski and The Daydreamers at The Suburban Bourbon

JOHN DOMANSKI AND THE DAYDREAMERS PERFORMING AT THE SUBURBAN BOURBON ON MAY 18; PART OF PROCEEDS TO BENEFIT LIONS CHARITIES 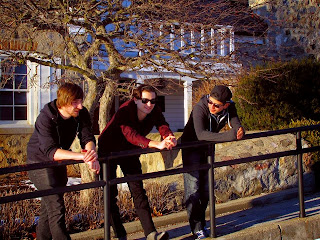 Muskego, Wisconsin – May 4, 2015 – John Domanski and The Daydreamers, a local band performing 90s alternative rock -influenced original creations along with their take on a number of covers we have all come to know and love, will be performing at The Suburban Bourbon, S76 W17745 Janesville Road, Muskego, on the evening of Monday, May 18, from 7-9pm.

The $10 admission ticket will include free beer from 7-9pm, and part of the evening’s proceeds will support Lions charities. Food will be available from the restaurant’s regular menu. Attendees will also be sent a free song via e-mail.

The band is just coming off of a performance at Six Flags Great America in Gurnee, IL for the theme park’s season opening weekend, and recently completed its first album, Ignite, which will be available for purchase at the May 18 event.

Tickets will be available at the door the evening of the performance, or may be purchased in advance online at www.tickethookups.com/events/19558 .

For additional information on John Domanski and The Daydreamers, as well as upcoming performances and news, please visit www.johndomanski.com . Become a fan of the band’s Facebook page at www.facebook.com/johndomanskimusic .
###
Posted by Staff at 7:42:00 PM