Lead singer of Fox Valley-based band shares his advice to aspiring musicians, talks about the band’s greatest gigs so far, and offers his insights on Wisconsin’s place in the music industry, among other topics.

Multiple Wisconsin Area Music Industry (WAMI) awards won. Two appearances at The Viper Room. Recording at the Goo Goo Dolls' studio. And performing in front of a crowd of thousands upon thousands at a Presidential Inauguration. We’re talking none other than Wisconsin's very own, Boxkar. Straight out of our beloved state’s Fox Valley comes this band that has accomplished all of these feats, and then some. And it has managed to do all of this while remaining unsigned.

Perhaps my first time seeing Boxkar - its name rang a vague bell for me, but I really couldn’t place it - was this past summer, in August of 2012. The band was performing one night up in the Wisconsin Dells, at the Edge O’ Dells campground. I was up there for my friend and business partner Phil’s bachelor party. The moment the band took the stage, I knew this was going to be a great show, and it certainly turned out to be. I knew I just had to talk to someone from the band after the show. And I knew that no longer would the word “Boxkar” merely ring a vague bell for me.

“We finally found our groove,” Chris Szebeni, Boxkar’s lead singer, told me in our conversation on November 27, explaining the release of the band’s new album, “Can You Hear Me”. “The response has been amazing, it’s been double than the previous two albums. It’s a reinvention of us.” 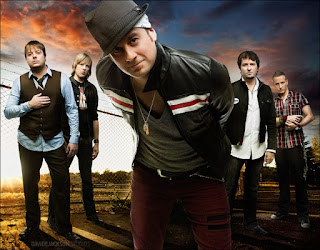 The band has been spending a lot of time in the studio this winter and traveling around Wisconsin these past few months, doing CD release parties to promote the new album, which ranked #75 for downloads on Amazon during its second week. Chris said the band’s goal now is to do a new album every year. And in March, Boxkar will be participating in a showcase in Nashville.

It certainly doesn’t hurt to be based out of the Fox Valley, which Chris described as “…a hotbed for music and bands.” But being from Wisconsin doesn’t come without challenges. “Wisconsin is a tough climate for music. We’re often forgotten about as a state, when it comes to music,” he told me.

It became clear early on in our conversation just how much the fans mean to Chris and his band mates - Tom Thiel and Brian Saunders on guitar, Matt Hammen on Bass, and Matt Gieseke on drums. “They’re everything to us. Without them, none of this exists. They’re what keeps us going strong.” And Boxkar is as loyal to its fans as they are to it. Chris said he and other Boxkar members frequently make trips to see fans at Children’s Hospital, armed with t-shirts, CDs, and a lot of appreciation and love. There’s the band’s HOPE shows, which raise money for a variety of meaningful causes. The band’s first such show, Chris said, raised $17,000 in five hours for a fan battling breast cancer. And then there’s the Military Appreciation Day events at Wisconsin Timber Rattlers games in Appleton. “There’s a lot of things we do for the military,” Chris said. “It’s the least we can do for everything that service members do for us.”

I was curious about the creative process, how new material gets developed. Chris explained two ways. “There’s what we call the Nashville approach, where Saunders and I schedule a time to lock ourselves up in a basement recording studio with a bar. There’s a hoodie sweatshirt down there on a rocker I put on, we drink old-fashioneds, and just crank it out. And then there’s the natural way, where I’ll get a melody stuck in my head, and I’ll call the guys up for a practice session.”

And speaking about the creative process, Chris has another gift: he’s the one behind the band’s marketing and PR efforts, churning out promo packs, graphics, copy, and press kits. He designed the band’s Web site, as well. And when he’s not doing something for Boxkar, which is pretty rare, he can usually be found singing jingles on Mondays and Tuesdays.

Asked about some of his favorite memories and moments so far, Chris brought up Boxkar’s two performances at the famous Viper Room. The first time was for a showcase of record labels, while the second appearance was to open for Candlebox. “The first time around, there was a lot of interest and buzz coming off of our second album, ‘Boxkar’. 18 fans flew out there with us from Wisconsin, which was a blast. It was really a lot of fun. We joke that we really showed the people in L.A. how to drink. Two of our fans passed out in the place!” Chris recalled. And then there’s the 2005 Presidential Inauguration of George W. Bush, which Chris enthusiastically called, “…the best gig in my life, I’m not going to lie.” President Bush’s daughters love Boxkar, he told me. “We got to jam with B.B. King and John Popper. We performed in front of thousands of people for the president of the United States. What an awesome experience that all was,” he said. On top of all that, Boxkar had the distinction of being the only unsigned band to perform at that Inaugural.

Where can you get your hands on such great music, you ask? For starters, check out the links below for videos, downloads, the band’s upcoming live performance schedule, and a heck of a lot more. And if you’re like me, and either haven’t really caught on or just outright refuse to buy into the whole digital download world yet, there’s still hope: physical CDs of this great music can be purchased online at CDBaby, or at Exclusive Company stores. No matter the method chosen, check the band out. You're not going to be disappointed.

Check out other neat, exclusive interviews by Aaron S. Robertson.
Posted by Staff at 2:04:00 PM